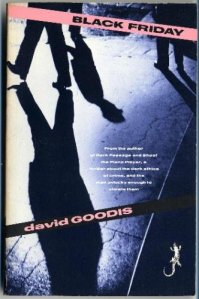 I’m hooked on that noir. My last review was Jim Thompson’s After Dark, My Sweet, and while I try to vary my reviews by genre I couldn’t resist following up with more another work of vintage crime. Black Friday is the first book I’ve read from David Goodis. Now I must admit after reading the deeply psychological work of Jim Thompson, Goodis felt dry and somewhat stiff. For a moment I had wondered if Black Lizard press finally dropped that dreaded bomb of disappointment. By the halfway point I glad to have discovered another master of the craft. Black Friday is a story about Hart, a desperate man running from the law for an unforgivable crime. He finds a man in the street dying of a gunshot wound. From there is taken in by the gang who murdered the man. The cops are looking for everyone involved and so they’re trapped in the hideout together. Hart must keep his nerves sharp if he wants to keep alive in a crowded little house with violent men and vicious women.

This is one of the more explicitly violent old school noirs I’ve read. Goodis has a detached style that zooms in on the brutality with a shocking swiftness. If I had to describe this book in one word I’d use, “economical.” Goodis pulls the maximum worth out of the fewest amounts of scenes, dialogue, and characters. The majority of the book takes place in single setting, and yet the book never becomes dull. The confrontation between the characters keeps the tension strong with a threat violence looming over them at all times. There is also enough sex to throw in a scandalous edge. Black Friday is like a game of chicken where the loser gets fried and whoever goes too far only guts himself.

Black Friday is another short novel which read more like a long short story. Goodis’ detached style does take a little while to get used to, but it feels almost as if he’s baiting the reader to lower his guard before throwing a sack over his head. This is a claustrophobic tale that can be appreciated by crime fans of either the classic works or the modern style. Who can resist the combination of classic noir story telling with the level of violence used today? I already have my next Goodis title lined up. 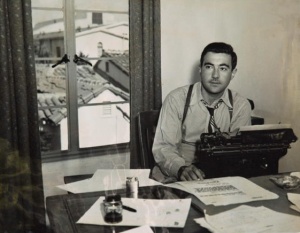 After dark, my sweet by Jim Thompson

Jim Thompson is quickly becoming my favorite noir writer with books like my latest read, After Dark, My Sweet. It’s a story about Williams Collins, an escapee from a mental institution who tries to blend into a small town as a normal person. He’s a very kind man who is too easily persuaded and is subject to violent episodes. Quickly he becomes entangled with a wickedly alcoholic woman named Fay Anderson who pulls him into a sinister plot with her partner in crime, a crocked ex-cop named Uncle Bud. Collins easily sees that he’s being setup to be the fall man in their plot, but his desperate loneliness compels him to stay in tragic company. Fay and Uncle Bud figure him for a prime sucker until they find themselves trapped in their own web and it becomes a deadly game of cut-throat.

Thompson creates a deeply intimate connection between the reader and Collins. We get to feel the inner working of his paranoia, desires, and morality. The characters are deeply flawed people who are surviving by any means necessary. Fear and sex are used for bargaining chips in a game of poker with no cards. It’s interesting to begin psychoanalyzing the characters in an attempt to predict their next move and play their motives. Thompson creates a bond between the reader and Collins in which his existence becomes shared. You don’t want him to get killed because it would mean your death too.

This book is short read of only a 133 pages. It’s amazing how much Thompson can accomplish in such a short time and still make it feel complete. The violence in his work is balanced by the gentle and charming nature of Collins who in the end is both a victim and aggressor.  The suspense is worked supremely like a symphony raising and falling with dramatic affect. Murderous sexual tension is never in short supply. O’ how the fragility of people makes for such rewarding entertainment! Jim Thompson is considered a master from the school of hardcore American noir. This is the second book I’ve read by him and I’ll be reviewing another of his books soon.

He Died with his Eyes Open by Derek Raymond is a modern noir that holds its own even amongst the classic masters. It’s the opening book to Factory Series. But don’t worry, there isn’t an annoying cliffhanger. The story takes place in cold streets of London where a middle aged man is found with his head bashed in. The protagonist, a police detective, has nothing go on besides a collection of tapes the murdered man left behind. They lead him into the underbelly of jolly old England in which he meets some bizarre characters. There is a highly psychological dimension to this book. We get to hear the dead man speak for himself, almost as if he’s pleading from beyond the grave.

It took me a little while to get used to Raymond’s British style. Every noir I’ve read is by American writers. I had to go on youtube and listen to Raymond do a reading in order to understand his rhythm (which was great). This book is hardcore cut-throat noir with an original plot. Raymond’s portrayal of human nature comes from an understanding that can only be obtained by direct experience. In other words, the man has been places. The way his characters behave just can’t be made up.

I strongly recommend this book to anyone who enjoys gritty crime fiction. Derek Raymond isn’t a huge name; he’s one of those hidden gems waiting to be discovered. I never heard of him until I read this book. It was like walking into a dark room and getting a bat to the face. What a pleasant surprise, indeed. 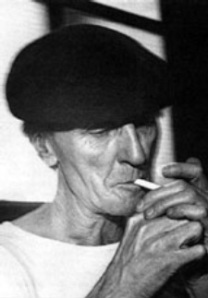