Film review of “Faster” a motogp documentary that rips 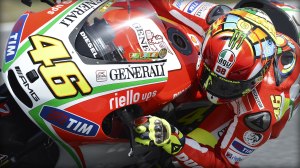 The MotoGP is where riders compete to on the fastest motorcycles in the world, 500cc that can top out at nearly 200 mph. Faster is a documentary that follows the 2001-2002 seasons across the world. If you’re not a sports racer, don’t discount movie so fast. What makes this film fascinating is the in depth look into the mentality of the people who compete where the stakes are deadly high. Their world is truly of itself.

The film centers on an eccentric group of world class riders (Valentino Rossi, Max Biaggi, Garry McCoy, and John Hopkins). Their rivalries, passions, and philosophies are depicted through interviews and on the track. There’s a good balance between these two aspects. The personalities are hilarious. There is also enough of a psychological factor and drama to give the film depth. All this serves to draw the viewer’s feelings into the race scenes. Everyone will gravitate towards their favorite; the defending champion, bitter rival, upcoming rookie. The on bike cameras give a great first person perspective on the battlefield the track is. There is also plenty of brutal wreckage footage to remind you that this more than a mere sport.

I highly recommend Faster to anyone who enjoys motorcycles, adrenaline sports, and is fascinated at what extremes people can push themselves to. I’m personally not a racing fan of any kind, but I was very impressed.  It’s one of those films that changes your perspective. Faster is more than just a movie about going insanely fast in a quest for glory, although, who could complain about that?

Play The Piano Drunk Like A Percussion Instrument Until The Fingers Begin To Bleed A Bit by Charles Bukowski is small book of big poems. They’re short and shit directly in your head. All of Bukowski’s works have a quality of being from a generation that lived harder, but also from a man who cared less because he saw the futility in everything. His tombstone reads “Don’t Try.” Yet, the poems in Play The Piano Drunk… take your mind to his world of seedy bars, faithless women, and desolate factories, within six words. It’s a book for anyone who knows what it’s like to waste away a job while being strangled with a crucifix. If you’ve never read a work by Bukowski, or even heard of him, pick up this book, pick up any of his books. 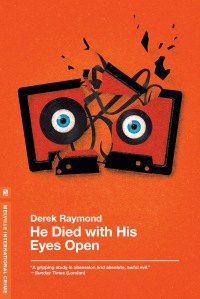 He Died with his Eyes Open by Derek Raymond is a modern noir that holds its own even amongst the classic masters. It’s the opening book to Factory Series. But don’t worry, there isn’t an annoying cliffhanger. The story takes place in cold streets of London where a middle aged man is found with his head bashed in. The protagonist, a police detective, has nothing go on besides a collection of tapes the murdered man left behind. They lead him into the underbelly of jolly old England in which he meets some bizarre characters. There is a highly psychological dimension to this book. We get to hear the dead man speak for himself, almost as if he’s pleading from beyond the grave.

It took me a little while to get used to Raymond’s British style. Every noir I’ve read is by American writers. I had to go on youtube and listen to Raymond do a reading in order to understand his rhythm (which was great). This book is hardcore cut-throat noir with an original plot. Raymond’s portrayal of human nature comes from an understanding that can only be obtained by direct experience. In other words, the man has been places. The way his characters behave just can’t be made up.

I strongly recommend this book to anyone who enjoys gritty crime fiction. Derek Raymond isn’t a huge name; he’s one of those hidden gems waiting to be discovered. I never heard of him until I read this book. It was like walking into a dark room and getting a bat to the face. What a pleasant surprise, indeed.

Haruki Murakami’s memoir What I Talk About When I Talk About Running is not a book I can easily categorize. I enjoyed it and found it enlightening to get a personal glimpse into the mind of a modern literary giant. First off, I do admit that my views are bias. I’ve read almost all of his works, and if you haven’t heard of him, I suggest picking up at least Hardboiled Wonderland and The End of the World. But what about this book, though?

It wasn’t as earth shatteringly revealing as I had hoped. His novels investigate humanity and metaphysics on a much deeper level. I sort of expected this from the title and size of the book. There’s only so much truth that can be revealed in a 180 pages. In his memoir, Murakami takes a much more humble and laidback approach. The majority of the book deals with his analogy of being a serious novelist and running marathons. While the writing is very pleasant to read, I don’t know if there’s enough to keep non-runners/writers/ and Murakami fans interested.

I don’t run, but I like to surf, and found his views on reaching higher spiritual levels through physical discipline a very honest analysis. He spends a lot of time writing about accepting getting older but enjoying the quality of life rather than by how many points one gets. I wished there was more on the actual art of writing (something similar to Stephen King’s On Writing), but sadly most of it stayed on the topic of running and its connections to writing, which we’re usually vague. One thing I’ve learned from living in Japan is that Japanese people love to be vague. It is part of the culture to avoid being so direct. It kills me in real life and it sort of annoyed me in this book. Still, when he did directly write about writing, his advice was indispensable.

In the end, despite my bitching, I have to label this a book that was fun to read. It was easy going, the imagery was strong, and you could feel a genuine quality of sincerity. I recommend you give this book a try. Read a sample, it might be for you.

Empire of Illusion: The end of literacy and the triumph of spectacle by Chris Hedges

Chris Hedges presents the social gutter of America in Empire of Illusion: The End of Literacy and the Triumph of Spectacle. Hedges argues that we have become a disposable culture. We throw away our education, environment, and values in exchange for stereotypes that make us feel empowered. This massive stereotype replaces reality, never explains it, and is corporate owned.

A pattern of exploitation becomes clear; an agenda becomes obvious. An intellectual and moral wasteland sets us up for a totalitarian state. We cannot argue for ourselves if we lack the rhetorical skills and social conviction to do so. We cannot be and think for ourselves if our self-image is determined by a board of directors trying to make a maximum profit.

“Knowledge is confused with how we are made to feel. Commercial brands are mistaken for expressions of individuality. And in this precipitous decline of values and literacy, among those who cannot read and those who have given up reading, fertile ground for a new totalitarianism is being seeded.”

Hedges stays objective and doesn’t resort to a “holier than thou” manner. His reflections are insightful and lead readers to make their own judgments. There will surely be areas in which readers will disagree with varying degrees, it’s impossible not to since this book covers such a broad range of contemporary culture, but in the least he’ll persuade you to challenge your ideas. I recommend this book to anyone who is socially aware and is interested in the ugly un-reality that is peddled to us all.

Chris Hedges is a Pulitzer Prize recipient. His other works include War is a Force that gives us meaning and American Fascists: The Christian Right and the War on America.