Several of my friends and other brave souls have recently stepped ashore Blubber Island. They have entered a dangerous world in which nobody can guarantee their safety. As the author of this work, I feel somewhat responsible for the countless people (this includes you) who will end up deranged, scarfing down handfuls of their own “caca” [Latin for feces]. This realization troubled me greatly. “But Ismael,” you ask, “why don’t you just pull Blubber Island off shelves and ask everyone to stop reading it?”

Perish the thought, I say.

In order to tip the scales in favor of “not eating caca,” I decided to write an official “Blubber Island Survival Guide.” Blubber Island is a vast universe encompassing countless dimensions and worlds. It would be impossible and impractical to try and cram everything in one shot, thus I will instead focus on key elements. Follow these guidelines and you might make it out alive. 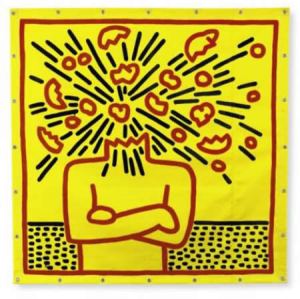 This is perfectly natural. (winsomeaunt.blogspot.com)

Exploding Heads are a natural phenomenon on Blubber Island. The postman could be handing you a letter from your friend in Monkeys Eyebrow, KY, and then you’ll make some offhand remark like, “Hey, my neighbor is sort of an asshole. You think I could fart into one of his letters?” The guy gives you a funny look and BAM! The mailman’s head blow up like pumpkin stuffed with cherry bombs. Whatever you do, do not stop and try to figure out why it happened. Just accept it and move on. There have been reports of chain reaction head explosions. Why risk it?

Think of an exploding head as a traffic light turning green. Head blows up, you move forward. Simple.

Blubber Island is inhabited by flesh eating zombies. Exercise all traditional zombie survival tactics such as; keeping a sharp ear, running away instead of fighting, and abandoning infected/slower traveling companions (see Image of father above). Occasionally, zombies will seem to appear without warning. Be on guard for zombies bursting out of the ground or falling out of the blue sky. Much like exploding heads, don’t think run. The following film clip is for educational purposes.

Now wasn’t that easy? He made it and so can you. 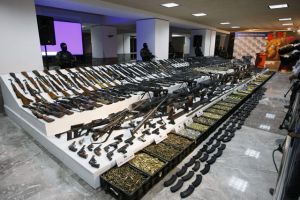 They’re not doing any good just lying around. (tucsoncitizen.com)

Another natural phenomenon is the abundant presence of guns. On Blubber Island, they seem to pop up in the strangest places. But you can’t just reach into a bush and pull out AK-47. The rules of karma are that you must put some degree of effort into it. Think outside the box and look for secret compartments. If those zombies chase you into a kitchen, it wouldn’t hurt to check the refrigerator (if you get my drift). All guns come equipped with two things: unlimited ammo and unlimited bad guys. Learn to shoot while running at a full sprint, and I recommend learning from the pros.

They definitely read this blog.

This is a good crash course in dealing with the chaotic Blubber Island universe. I will continue updating the survival guide. Hope to see you next time. Keep your finger on the trigger and always aim for the head.